Is it an Image or a Document? Discussing the “grey area” of overlap between images and documents. 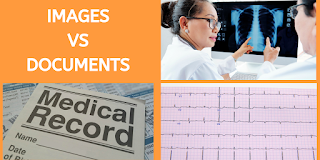 There is a major increase in images to be managed by enterprise imaging systems. It is critical to
decide on how to format the images and documents (DICOM or native?) and where to manage them (EMR, PACS/VNA, document management system, other? Below are some thoughts and recommendations you might consider.

Digital medical imaging used to be confined to radiology and cardiology, and on a smaller scale to oncology. Images were created, managed and archived within these departments. If you wanted to see them you would need to access the image management system (PACS) for that department.
Over the past decade, new image sources started to appear, for example, images taken during surgery through a scope, videos recorded by the gastroenterologists of endoscopic procedures, ophthalmologists recorded retinal images, and pathologists began using digital pathology imaging. Point of care (POC) ultrasound also began to be used increasingly, and now there are intelligent scanning probes available that can connect to a smart phone or tablet.

As the sources of imaging grow, the volume of imaging is growing exponentially. Talking with informaticists at major hospitals, it seems there are new image sources every week, whether it is in the ER where people are taking pictures for wound care or during surgery to assist anesthesiologists.
Good examples of the type of imaging that typically takes place outside the traditional radiology and cardiology domain can be seen at a recent webcast on encounter-based imaging workflow. In his presentation, Ken Persons from the Mayo clinic talks about the fact that they have literally 100’s of alternate imaging devices that create tens of thousands of images per month that need to be archived and managed.

Departments that never recorded images before are now doing this, such as videos from physical therapy recording changes in gait after back surgery. In addition to this avalanche of images generated by healthcare practitioners, soon there will be images taken by patients themselves that need to be kept, e.g. of a scar after surgery after they are being sent home. This will replace in-person follow up exams which will save time, effort and be more efficient. Managing these images has become a major challenge and has shifted from departmental systems to enterprise image management systems, i.e. from PACS to VNA’s.

How is non-image data managed? Textual data such as patient demographics, orders, results and billing information is exchanged, while connecting 100+ computer systems in a typical mid-size hospital, through interface engines. Over the past 5-10 years, Hospital Information Systems (HIS) and departmental systems dedicated to radiology (RIS), cardiology (CIS) and other departments, are being replaced by Electronic Medical Record systems (EMRs) and information is accessed in a patient-centric manner.

A physician now has a single log-on to the EMR portal and can access all the clinical text-based information as well as images. Textual information can be stored and managed by an EMR, e.g. for a lab result as discrete information in its database, or linked to as a document, e.g. a scanned lab report or a PDF document. In addition to these documents being managed in the EMR, they can also be managed and stored in a separate document management system with an API to the EMR for retrieval.

There is no single solution for the problem of where to manage (i.e. index and archive) diagnostic radiology reports. Their formats vary widely as discussed in a related post discussing report exchange on CD’s. In addition to standardized formats such as DICOM SR’s and Secondary capture, additional formats appeared including XML, RTF, TXT and native PDF’s. Not only do the diagnostic report formats differ, but also where they are managed. The reports could have been stored in departmental systems (RIS) or in some cases by a broker. A case in point is the AGFA (initially MITRA) broker (now called Connectivity Manager) that functions as a Modality Worklist provider, and in many institutions also is used to store reports. In addition, reports could reside temporarily in the Voice Recognition System, with another copy in the RIS, EMR and PACS. This causes issues with ensuring amendments and changes to these documents stay in sync at various locations.

Before the universal EMR access, many radiology departments would scan in old reports so they could be seen on the radiology workstation, in addition to scanning patient waivers and other related information into their PACS. This is still widely practiced, witnessed by the proliferation of paper scanners in those departments. These documents are converted to DICOM screen-saves (Secondary Capture), or, if you are lucky, as DICOM encapsulated PDF’s which are much smaller in file size than the Secondary Captures. With regard to MPEG’s, for example swallow studies, a common practice is to create so-called Multiframe Secondary Capture DICOM images. All of this DICOM “encapsulation” is done to manage these objects easily within the PACS, which provides convenient access for a radiologist.

The discussion about images and documents poses the question on what the difference is between an image and a document, which would also determine if the “object” is accessed from an image management system (PACS/VNA), which infers that it is in a DICOM format, or from a document management system (a true document management system, or RIS, EMR) which either assumes a XDS document format (using the defined XDS metadata) or some other semi-proprietary indexing and retrieval system. Note that there are several VNA’s that manage non-DICOM objects, but for the purpose of this discussion, it is assumed that a PACS/VNA manages “DICOM-only” objects.
In most cases, the difference between images and documents is obvious, for example, most people agree that a chest X-ray is a typical example of an image, and a PDF file is a clear example of a document, but what about a JPEG picture taken by a phone in the ER, or an MPEG video clip of a swallow study? A document management system can manage this, or, alternatively, we can “encapsulate” it in a DICOM wrapper and make it an image similar to an X-ray, with the same metadata, being managed by a PACS system.

All of which shows that there is a grey area with overlap between images and documents, whereby many documents and other objects could be considered either images, or a better word is DICOM objects and managed by the PACS, or alternatively considered documents and managed by a document management system. Imagine you would implement an enterprise image management and document management system, what would your choices be with regard to these overlapping objects?
Here are my recommendations:
1. Keep PDF’s as native PDF documents, UNLESS they are part of the same imaging study. For example, if you have an ophthalmology study that includes several retinal images and the same study also creates pdf’s, it would be easier to keep them together which means encapsulating the PDF as a DICOM object. But if you have a PDF for example, from a bone densitometry device, without any corresponding images, I suggest storing it as a PDF.
2.  Use the native format as much as possible:
a. There is no reason to encapsulate a CDA in a DICOM or even a FHIR document object, conversions often create loss of information and are often not reversible. Keep them as CDA’s.
b. Manage JPEG’s and MPEG’s (and others, e.g. TIFF etc.)  as “documents.” As a matter of fact, by using the XDS meta-data set to manage these you are better off because you also are able to manage information that is critical in an enterprise environment such as “specialty” and “department,” which would not be available in the DICOM metadata.
c. Use DICOM encoded EKG’s instead of the PDF screenshots.
d. Stay away from DICOM Secondary Capture if there is original data available, remember that those are “screenshots” with limited information, specifically, don’t use the Screen-Captured dose information from CT’s but rather the full fidelity DICOM Structured Reports which have many more details.
3. Stop scanning documents into the PACS/VNA as DICOM secondary capture and/or PDF’s, they don’t belong there, they should be in the EMR and/or document system.

An EMR is very well suited to provide a longitudinal record of a patient, however, none of the EMR’s I know of will store images. Images are typically accessed by a link from the EMR to a PACS/VNA so that they can be viewed in the same window as the patient record on a computer or mobile device. In contrast, documents are often stored in the EMR, but these are typically indexed in a rudimentary manner and most users hate to go through many documents that might be attached to a patient record to look for the one that has the information they are looking for. A better solution for document access is to have a separate enterprise document management system, which should be able to do better job managing these.

Some VNA’s are also capable of managing documents in addition to images, preferably using the XDS infra-structure. As a matter of fact, if you are NOT using the XDS standard, but a semi-proprietary interface instead to store JPEG’s, MPEG’s and all types of other documents, you might have a major issue as you will be locked into a particular vendor with potential future data migration issues.

Also, be aware of the differences between XDS implementations. The initial XDS profile definitions were based on SOAP messaging and document encapsulation, the latest versions include web services, i.e. DICOMWeb-RS for images and FHIR for documents. Web services allow images or documents to be accessed through a URL. Accessing information through web services is how pretty much all popular web-based information delivery happens today e.g. using Facebook, Amazon, and many others. It is very efficient and relatively easy to implement.

Modern healthcare architecture is moving towards deconstructing the traditional EMR/PACS/RIS silo’s to allow for distributed or cloud-based image and information management systems. From the user perspective, who accesses the information through some kind of a computer based portal or mobile device, it does not really matter where the information is stored, as long as there is a standard “connection” or interface that allows access to either an image or document using web services.

Right now is the perfect time to revisit your current architecture and reconsider how and where you manage and archive images and documents. Many hospitals have multiple copies of these objects stored in a format that does not make sense at locations that were dictated by having easy access to the data without considering whether they really belonged there. Instead of cluttering the current systems, especially when planning for the next generation of systems that are going to be FHIR and DICOMWeb enabled, it is important to index and manage your images and documents at the location where they belong in a format that makes sense.