PACS administrators or as they are also called, Imaging Informatics Professionals (IIP), have been around for about 20 years, ever since providers started to realize that it takes a dedicated support staff to manage the PACS system and be responsible for its data integrity and operation. In 2004 a certification agency, the PACS Administrators Registry and certification Association, aka PARCA, was formed to provide a proof of a certain level of proficiency witnessed by passing a certification exam. Not that long after that, the American Board of Imaging Informatics, aka ABII, was formed in a partnership between ARRT and SIIM, providing another certification called CIIP. The PARCA and CIIP certifications are quite different due to their origin and intended target group of professionals. This write up is intended to clarify the different certification paths to benefit potential candidates that are looking to become certified and for those who are trying to recruit potential IIP professionals. Here are the main differences: 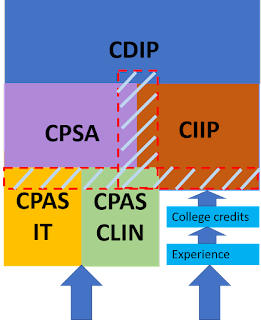 1.       PARCA has four different certification exams (see figure). The basic level shown on the left-bottom, is the Certified PACS Associate (CPAS) level which requires both IT and Clinical proficiency and therefore requires both the CPAS clinical and IT certification exams to be taken. ONLY after passing this first level of certification, the candidate can continue to become certified as a Certified PACS System Administrator (CPSA). There is also a special, stand-alone certification dedicated to DICOM, i.e., the CDIP or Certified DICOM Integration Professional, which is becoming increasingly important because IIP’s are having to do their own troubleshooting in case there is a dispute between a vendor and the healthcare enterprise. CDIP teaches important skills such as how to use a DICOM sniffer to investigate performance issues and integration problems. ABII offers only one level of certification, i.e. Certified Imaging Informatic Professional (CIIP). Note that ABII requires both a certain level of experience AND minimum level of relevant imaging informatics training (i.e. semester credits) prior to CIIP certification, which is not required for the PARCA certification. The CIIP qualification requirements are explained in more detail on their website, and consists of a point system, for example, one could qualify with 2 years healthcare experience and a relevant  Masters degree, 5 years experience, 36 hours of imaging informatics experinece and an Associate degree and combinations thereof.

3.       The CPAS, i.e. basic level of PARCA, has two distinct target audiences. First, CPAS is appropriate for either non-healthcare professionals or professionals who work in a related field who are looking for a career change and want to get into the PACS profession. These are mostly Radiological Technologists or IT professionals, who either need additional training in either the IT or clinical area. The other audience is for those professionals who are already working in PACS but never had the opportunity to gain either the clinical or IT skills and would like to become trained and certified in this area. The first audience, i.e., individuals without any PACS background, is not served by the CIIP certification because CIIP requires a certain number of years of experience. This is also the case for those who were unable to complete any formal education in the form of a certain number of college credits: they would be able to take the CPAS certification but are excluded from taking the CIIP exam.

4.       PARCA and ABII took a very different approach with regard to developing their what is called certification requirements or Test Content Outline (TCO). PARCA exam requirements were developed top down, starting with outcome measurements, and learning objectives and were developed by educators in this field. The ABII requirements (TCO) were developed bottom up, based on a survey and subsequent committee of volunteers. The good news is that SIIM is in the process of “reverse engineering” the ABII requirements to make the curriculum more coherent. The same applies to the supporting materials, the PARCA textbooks are written by a single author, while the CIIP textbook is created by various authors which makes it challenging to have a consistent style and prevent gaps and overlaps.

5.       PARCA has an international focus. The majority of its board members are from outside the US. 20% of its candidates are from outside the US and it is growing in importance. Also, one should realize that in many countries, especially LMIC regions (Lower and Middle Income Countries), PACS is still in its infancy and therefore a prime target for CPAS certification, while CIIP certification, which is focused on people with experience, would not be an option.

6.       CIIP exams have to be taken at a physical testing center. In contrast, PARCA has provided on-line exams since 2005 which allows the exams to be taken “any time-anywhere”. The exams are on-line proctored, that is each student has a dedicated one-on-one proctor who is watching the candidate continuously during the examination. Any potential distraction and/or indication that a student might use any external resource or even look away from the screen will invalidate the exam. This guarantees a secure test environment. Electronic exams by telepresence instead of a physical presence at a test center has a lot of other advantages, first of all, none of the exams are identical as the questions are pulled randomly from a large test pool that is at least twice the actual test size, with the multiple choice answers being re-arranged for each test. In addition, on-line certification testing is the only way to offer international certification exams because many countries do not have access to physical testing centers. Lastly, on-line testing is much more cost effective. That is most likely one of the reasons that the PARCA certification exam cost is less than half the cost of the CIIP certification while the PARCA retake fee ($20) is less than one tenth of the CIIP retake cost ($250).

7.       The difference between PARCA and CIIP is also reflected in the training options provided by 3rd parties such as SIIM, OTech and others (note that PARCA and ABII are not offering any training themselves as they try to keep a "barrier" between trainers and examiners). PARCA CPAS training is typically a several day event going through the materials in depth because much of the content is new to the candidates. The CIIP training is typically a bootcamp to provide experienced professionals the opportunity to refresh their knowledge prior to taking the exam. The PARCA IT as well as the CDIP is also more hands-on than the CIIP, as those topics are difficult to master without any hands-on exercises.

8.       There are other minor differences between PARCA and CIIP such as related to the requirement for continuing education and re-certification and when the content is made up-to-date because the PARCA requirements have been recently updated to include new technologies such as AI and cyber security and the CIIP Test Content Outline is up-to-date as of 2019.

In conclusion, both PARCA and CIIP certifications are valuable and given the fact that after 16 years, thousands of professionals have become certified, both have certainly established a new standard of professionalism which benefits the imaging and informatics community. It would be beneficial for the IIP community if PARCA and ABII would merge and work towards a more consolidated approach taking the best of both worlds. Time will tell whether this could happen.

For more details about either certification see PARCA and ABII.

About the author: Herman Oosterwijk has taught the PARCA curriculum since its inception. He created detailed study guides for both the CIIP and PARCA certifications. He is also part of the SIIM committee to create a new internship program based on the CIIP curriculum and part of the SIIM CIIP bootcamp faculty.