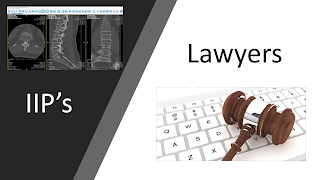 Unfortunately patient safety, privacy and security violations, as well as disputes about PACS functionality and contracting might end up in arbitration cases or even in court. As a judge and/or jury is unfamiliar with the field of Imaging and Informatics, especially if it comes to understanding issues with DICOM connectivity or other details, lawyers often will call on Imaging Informatics Professionals (IIP’s) who are prepared to function as an expert witness to help settle a dispute. The same can be said regarding involvement of medical physicists, as it relates to image quality and/or radiation safety matters.

Here are some typical examples that we as authors and working in the industry for many years have been involved with as a consultant and/or expert witness that explain the role of IIP’s/medical physicists in legal (or at least potentially legal) disputes and show how you can be better prepared as a professional to anticipate potential legal proceedings.

1.Disputes between vendors and providers – These types of disputes are almost always caused by a mismatch of vendor capabilities and provider expectations. If there is a detailed RFP that spells out the requirements then the dispute is relatively easy to settle. In one case, a provider did not want to pay for the PACS delivery as it argued that the PACS did not meet the requirements. I did an onsite audit checking each RFP item and concluded in my final report that the vendor had complied with 95% of all items and was due full payment.

In another case, the vendor did NOT meet even 50% of the requirements, which forced them to pull out the system and pay for a replacement. If there is not a detailed RFP to go back to, it gets hard to find out what the expectations would have been, in which case there is often a settlement reached in-between.

Lesson learned; make sure you have very well defined requirements when purchasing a PACS including performance, features, functionality etc. so you are covered.

2. Technical issues – A radiation therapy vendor installed both the planning system and the therapy delivery system (linac). A programming error in the DICOM interface sent the treatment parameters to the therapy system with the ISO-center inverted, causing patients who were supposed to be treated for throat cancer to be radiated on their spine which caused them to become paraplegic. One patient became so depressed that he took his life. There was an FDA warning issued for the device and it was eventually corrected, but not after several patients were incorrectly treated.

Lesson learned; never trust a vendor, make sure you check all settings, parameters, etc. especially if it potentially can cause direct patient harm.

3. Misdiagnosis – “I did not see that lesion,” is unfortunately still a common event. Humans are not perfect, but some professionals are just incompetent, and the general public should be protected from those that do not deserve to be treating patients. In one case, a radiologist argued that the monitor was defective, and he could not see the lesion (even I could see the hemorrhage in the brain). The dispute required the calibration files to be pulled for that workstation. In another case a radiologist flatly denied that he saw the chest image to check the tube placement, which was refuted by showing the audit trail proof that he himself indeed (or someone with his login-password) looked at the image. In both cases the patient died, in the first case they gave blood thinner to a patient with a bleed in the brain, in the second case the patient was in the ICU and died because of incorrect tube placement.

Lesson learned; keep your calibration files for your monitors safe and also all your audit trails as they might be needed for a case.

4. QA/QC policies not being followed – A technologist selected the wrong study and the report which indicated a terminal disease was connected to the wrong patient. The good news was that the terminally ill patient already knew about the disease, but the patient who was perfectly healthy got the bad news that her days were numbered. After the discovery of the error, you can imagine the stress and agony she went through, causing her to sue the hospital.

Lessons learned; have very well defined QA policies in place that require the technologist to double check the patient demographics, defining these policies typically is the job of an IIP.

5. Privacy violations – A radiologist was fired because his “supervisor,” i.e. medical director looked at his brain CT and deemed him to be unfit for practicing radiology as he had an apparent brain cancer. The medical director argued that it was her “duty” to perform regular QA checks on all of the department studies, however, the radiologist argued that his privacy was violated and should not have been fired for that reason as he had sought medical attention and was treated accordingly.

Lesson learned; again, make sure you keep your audit trails available, in this case for proving it was indeed a privacy violation.

6. Commercial grade vs. medical grade displays for diagnostic interpretation – During an evaluation of a radiologist’s home set of 5 MP displays used primarily for mammography reporting, I was asked to look at her > 5 MP Apple display as well for comparison. The question she brought to my attention was “are these satisfactory for mammography interpretation”? The AAPM TG18-QC test pattern was brought up and looked great (all details supposed to be observed were observed). However, further measurements of the luminance patches across the entire dynamic range showed that there was gross non-conformance to the GSDF curve.

Lessons learned; never make assumptions regarding the calibration status of your displays, even if an image looks acceptable for interpretation and/or review. Use of calibration software with the front sensor and/or external photometer measurements should occur on a regular basis with documentation and records retention.

7. Phantom image retention – Routine quality control imaging of phantoms and/or other test objects can be of value, not only for compliance/accreditation requirements, but also as a form of documentation to prove that some sort of constancy evaluation of the image quality is being performed for your imaging unit. Regulatory officers/inspectors may decide to audit a facility to show that these phantom images have been retained and are consistent. Failing to adhere to imaging phantoms or retaining the images can result in fines, should an officer decide to enforce this. Furthermore, image retention can be extremely valuable in the event your facility is hit with a lawsuit and/or allegation.

Lessons learned; know your regulatory/accreditation requirements and adhere fully to these. Even if these requirements do not pertain to some modalities, routine phantom imaging and retention should still occur for the reasons mentioned previously.

8. Dental facility being sued – I was called in by a lawyer to act as an expert consultant regarding a dental facility being sued by one of its staff members. The staff member claimed that the cause of her breast cancer (resulting in a double mastectomy) and cataracts was the result of use of the facility’s panoramic x-ray unit. I had reviewed documentation regarding past service/x-ray compliance reports, Ministry approval to install the x-ray unit, and other related documentation. Furthermore, I had conducted a comprehensive evaluation of the unit according to AAPM TG 175 (Acceptance Testing and Quality Control of Dental Imaging Equipment). Based on my evaluation, no compliance requirements evaluated or reviewed failed.

Lessons learned; no matter if the modality produces a low amount of radiation relative to others (e.g. dental panoramic to diagnostic CT), ensure that you follow all compliance requirements and retain such documentation for the required amount of time. Lawsuits are a real thing and can occur for ANY facility!

9. Accidental exposure – An x-ray technologist had apparently performed both AP and LAT views of the tibia/fibula of a two-year old child who was suspected of a fracture. During the AP view, in the midst of the child crying and the father restraining the child to remain still for the exam, the technologist had forgotten to give shielding to both the child and father. Lead protection was provided prior to the LAT view being taken, however. I was called in to perform a dose/risk analysis regarding this matter. Output measurements of the x-ray unit were taken as well as a review of the images in PACS.

Upon review of the image headers, including the attributes pertaining to exposure techniques, I asked the technologist if she was aware of what range the exposure indicator should be within (the exposure indicator being a way to quantify how much radiation the detector received). The response given to me was a blank stare. In a follow-up discussion with the diagnostic imaging manager and chief radiologist, it was explained that the increased radiation risk to the child and father from the first exposure without any lead protection was minimal. However, it was further explained that some training for at least this technologist should occur regarding how much radiation is to be administered (via the exposure indicator).

Lessons learned; accidental exposures, even overexposures, deserve due diligence and use of an expert to add value to the matter. As an incidental finding performing this review, there was a knowledge gap revealed for this particular technologist. If radiation is administered, it’s crucial to be able to know how much radiation is used. Training in best and latest trends/standards should be implemented.

10. Investigation of high radiation badge readings – An x-ray facility had a general radiography room with a control badge directly behind a glass window. Since the start of using this room, the badge had not registered anything, but was kept to monitor the secondary radiation just in-case. However, after about one year of use, the badge was recording values, which surprised and concerned staff members, particularly some pregnant x-ray workers. I was asked to investigate this matter.

The facility had retained the documentation related to what shielding requirements they have been approved for. Upon reviewing this as well as taking various radiation measurements, I had noticed that the glass windows were half of the lead-equivalent thickness they were approved for (1.6 mm Pb vs. 3.2 mm Pb). Furthermore, the use of the room had increased by approximately three times from what they were approved for. Putting two and two together with other related evaluations, I concluded that the increase in use and inappropriate glass windows were the cause of the higher badge readings.

Lessons learned; when planning the design for approval of an x-ray room, be sure to verify and document what shielding is actually installed. One also should be proactive and plan ahead if they intend to increase the utilization of their x-ray machine, which will increase shielding requirements.

In conclusion, there are several unfortunate events (patient injury and/or death), that might end up in a legal case. You, as an IIP/medical physicist might be asked to either assist in providing data, an opinion, or serve as an expert witness to get to the bottom of a situation so that corrective actions and/or compensation for the ones impacted can be achieved. If you have any questions, don’t hesitate to contact us: